The Cradle of Humanity

Situated on the equator on Africa’s east coast, Kenya has been described as “the cradle of humanity”, due to the fact that in the Great Rift Valley, palaeontologists have discovered some of the earliest evidence of man’s ancestors. Kenya’s topography is incredibly diverse. The country is a land of mountains, valleys, open plains, deserts, forests, lakes, savannahs and a golden sanded coastline. With its scenic beauty and abundant wildlife, Kenya is one of Africa’s major tourist destinations.

Coffee was introduced to Kenya by French Missionaries, with seeds from Reunion Island in the 19th century. Despite its proximity to Ethiopia, the birthplace of coffee, documents suggest that its introduction to Kenya wasn’t until around 1893, with the first crop of coffee yielding in 1896. Though large estates run by British colonial settlers were initially established, the Coffee Act of 1933 paved the way for the Kenyan Coffee Board, who began to oversee coffee production, quality control and auctioning. 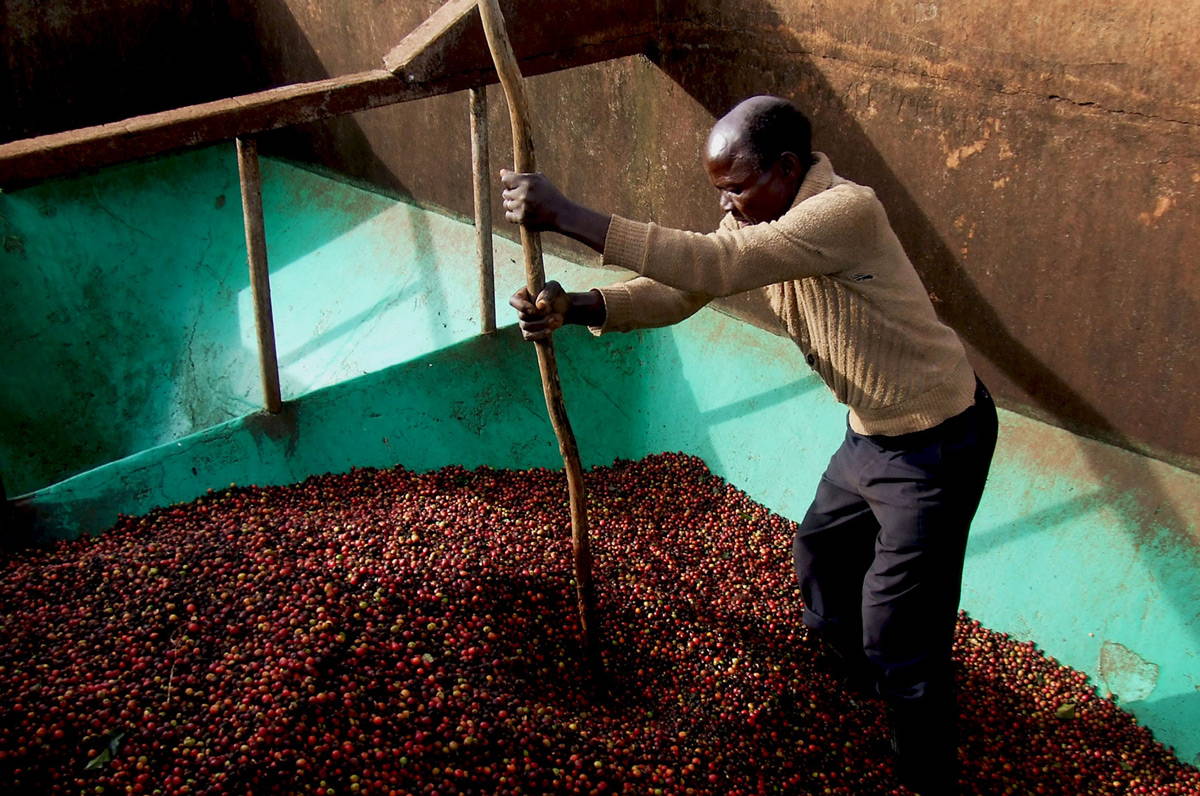 Typically, a Kenyan smallholding or ‘shamba’ is comprised of shade-grown coffee, a house, the family cow and a variety of vegetables and fruit to sustain the family.

The development of hybrids during the 1930s brought about the highly successful SL28 and SL34 varietals – coffees that are now world famous and highly admired for their wonderful complexity in the cup and unrivalled lemony acidity. The country’s best coffees are grown in the Central Highlands on the southern slopes of Mt. Kenya to the north and in the foothills of the Aberdare Mountains to the west. Here coffee is grown on farms with altitudes of up to 1,800 metres above sea level and this, along with the fertile volcanic soils of the region, are key to the unbelievable flavours that can be found within the cup.

This varietal was created in the 1930s by Scott Laboratories as botanists searched for different mutations of Bourbon and Typica. It has copper coloured leaves and its beans are broad. It is native to Kenya and is relatively low yielding, however the cup qualities are highly sought after. Characteristics can include intense lemon acidity, great sweetness, balance and complexity.

SL34 was created in the 1930s as a mutation between Bourbon and Typica. It differs to SL28 as it has bronze tipped leaves. This could perhaps mean it has greater similarity to the Typica varietal. SL34 is known to be fairly resistant to heavy rainfall at high altitudes and produces top quality coffee with complex citrus acidity and a heavy mouth feel.